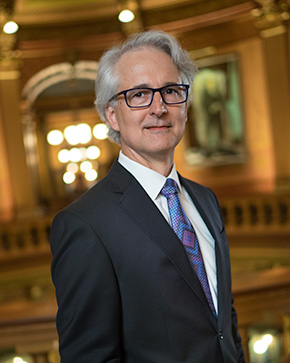 The Colorful Truth of Public Service

There are more ways to participate in public service than there are games in a casino. Public service can be as colorful and noisy as the slot section of the gaming floor!

My former boss, Governor John Engler, was kind enough to appoint me to three different commissions when I entered the private sector. Each appointment provided different insights and experiences into public service.

As vice chairman of the Michigan Economic Growth Authority, I learned about the expensive cost structures businesses face in Michigan compared to other states. As a member of the Local Government Claims Review Board, I learned how a commission can sound important, but have little work to do. In the years I “served”, we did not have a single meeting. Two very different experiences.

The board service most like a casino was as the chairman of the State Board of Canvassers. Appointed to fill the last year of another Republican member’s term, I served during an election year.  Upon my appointment, I did not realize the excitement headed the Board’s way later that year. Fortunately, the staff at the Bureau of Elections was a group of dedicated professionals whose goal was to implement the election laws of the state to the best of their ability and advise the volunteer Board members accordingly.

One of the memorable moments occurred when a marijuana petition drive, having collected sufficient signatures, was going before the Board to be placed on the General Election ballot. That seemed like an easy decision. However, the morning we were to consider placing the issue on the ballot, I received a call from Chris Thomas, then director of the Bureau of Elections, saying, “we have a problem”. He went on to explain the language of the petition, which amended the constitution, cited the wrong section of the constitution. A fatal flaw. The Board had no option other than to deny placing it on the ballot, despite the backers meeting the signature requirement.

Another petition drive would have redirected tobacco settlement dollars to a different funding stream and recipients. The other Republican member and I thought there was an issue which prevented us from voting to place it on the ballot. The two Democrats saw it differently. A tie vote meant the issue did not go on the ballot. I recall the proponents being livid at our no votes. A PR executive was spittin’ bullets mad at me. They took the Board to court, prevailed, and we placed it on the ballot. Years later the PR exec and I found ourselves working for mutual clients, no animosity. We each had a job to do, nothing personal. A different look than you might see in some parts of politics today.

The most interesting meeting we had was approximately five hours long. The public comment section was at the end and there was one person who waited that entire time to state his peace, Mr. Public. By the time we got to him, two of the Board members had to leave. The only other ones remaining was myself, one Democratic member, the Assistant Attorney General, the Elections Director, and the stenographer. My colleague on the Board had served several years already and seen Mr. Public come before the board many times. On this day, Mr. Public began his comments by accusing the Board of criminal activity. After putting up with his conspiratorial tirade for just so long, my colleague interrupted him saying, “sir, you are an ass, go home”. While this approach was not my style, I understood his frustration. We are both attorneys, taking our oath and Bar membership seriously. He had tolerated Mr. Public’s antics for many years. While it is important to consider public input, public service does not require taking public abuse. The direction my colleague provided Mr. Public did not dissuade him from speaking further, but he finally relented, and we all went home.

While the Board was split 50/50 Dems and Republicans, we had respect for the role each of us had to play and the service each gave to the election process. I’m thankful it’s service I can look back on fondly, in an era of combative, but not destructive (or death threat), politics.

In the years since I served on public boards the tone of discourse has changed. Once we could disagree on issues and policies but continue to work together. That doesn’t always seem to be the case anymore. While it’s easy to be dismayed by what we see in politics, especially at the national level, there are places where we can see people working together, across the aisle, for the good of citizens. You just need to look a little harder, through the flashing lights and noises of the political machines.